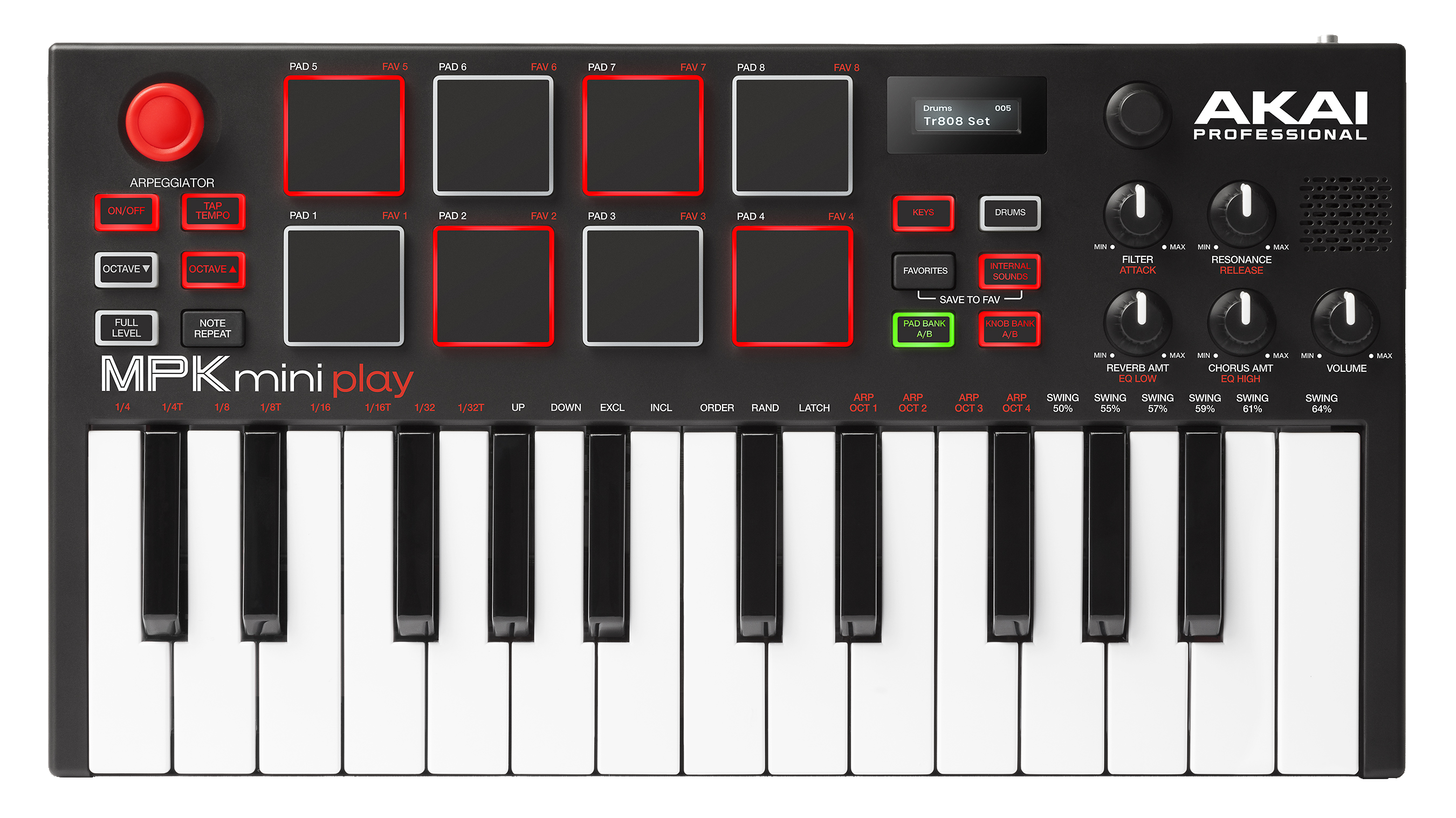 With over 100 built-in melodic instruments, drum kits, and sound effects, the MPK mini Play is an all in one solution to portable jam sessions. Whether you are on the couch, in the park, or traveling to your next gig, the MPK mini Play lets you capture those little moments of creation! Inspiration can strike wherever you are - the MPK mini Play can be anywhere you are.  This article answers some popular questions about the features and functionality of the MPK mini Play.

Do I need a computer to use the MPK mini Play?

No! The MPK mini Play has instruments, sound effects, and drum sounds built right into it so you can start playing right away!

Does the MPK mini Play include any software?

When connected to a computer (Internal Sounds button turned OFF), the MPK mini Play is easy to use with virtually any DAW or music creation software.

What types of sounds are inside the MPK mini Play?

The MPK mini Play includes all 128 instruments and sound effects found in the standard General MIDI sound set. In addition to those sounds, the MPK mini Play features 10 drum kits including classic 808 and 909-type kits as well as orchestral drum sounds and more!

Does the MPK mini Play have any onboard sound effects or functions?

Yes! The MPK mini Play features onboard chorus and reverb effects that can be dialed in with its encoders. In addition to these sound effects, the MPK mini Play also features retriggering functions like an arpeggiator for its keys and note repeat for its pads.

How does the MPK mini Play output audio?

The MPK mini Play can output audio from its built-in speaker. You can also connect headphones to its headphone output for more discreet playing or connect the headphone output to a speaker to get even louder!

How can I power the MPK mini Play?

How long will the batteries last in my MPK mini Play?

Batteries in the MPK mini Play can last up to 8 hours with continuous use. When you're running the Play off battery power and you've finished using it, be sure to switch it from BATT to USB to preserve battery life. Switching to USB will act as an 'off switch' for battery power. The Play will power on if you connect a USB cable to its USB port when the switch is set to USB but this will not drain the batteries.

Can I connect a sustain pedal to the MPK mini Play?

Yes, the MPK mini Play features an input for a standard 1/4" momentary non-latching footswitch that will act as a sustain pedal.

What does the joystick do?

What is Full Level?

Pressing the Full Level button will cause the pads to always send data at full velocity. This means that every time you press the pad, the note will be played back at full volume and strength. Full Level will not affect the velocity of the keys.

I created a sound that I like and I want to use it again later! Can I save my favorite sounds?

Yes, the MPK mini Play features 8 favorite slots that can be used to store the sounds you use the most.

To store a favorite, design your sound, press the Favorites and Internal Sounds buttons simultaneously, then tap one of the eight pads to store your Favorite to that location.

When you want to use that sound again, load a favorite by pressing the Favorites button and tapping one of the pads to recall that Favorite.

Settings like chorus, reverb, filter cutoff, etc. will be stored in a favorite's settings. An arrow in the display will indicate if a knob's current position is greater or less than the setting stored in the favorite so you can see any changes you've made. You can always retrieve the original settings of a favorite by simply reloading it.

Can I use the MPK mini Play with my computer?

Yes! In addition to the built-in sounds, the MPK mini Play can act as a class compliant USB MIDI controller so you can connect it to your computer and input MIDI data. The Play does not require a driver installation in order to connect to your computer. It will function with all major Windows operating systems from Windows XP and later to Mac operating systems from OS X 10.4 and later.

When the Play's internal sounds are turned off, it will act very similarly to its older sibling, the MPK mini mkII so you can use it to input MIDI note and MIDI control data into your DAW via its USB connection.

Is a software editor available for the MPK mini Play?

Yes, like the MPK mini mkII, a software editor is available to customize the controller's output when it is being used as a MIDI controller. The editor can also be used to configure your 8 Favorite presets. You can access the editor at the MPK mini Play's product page under Downloads:

Can I send MIDI from my computer back to the MPK mini Play?

Yes, the MPK mini Play can receive MIDI sequences from your DAW on 2 different MIDI channels simultaneously so the keys and pads can play at the same time. You will select the Play as a destination for MIDI data in your DAW. The MPK mini Play has 32 voices of polyphony so it can play back up to 32 individual notes at once.

Can I sync the arpeggiator and note repeat with my DAW?

Absolutely! The clock source for the MPK mini Play will need to be set to External in order for it to receive clock and be synchronized to MIDI clock data coming from your DAW. You can use the MPK mini Play's software editor to toggle the Play's clock to Internal or External.

Can I use the MPK mini mkII with my iOS device?

Yes, the MPK mini Play is a class-compliant USB MIDI controller so it can be used to input MIDI data into applications on your iOS device. The MPK mini Play does not have a low power mode to operate with an iOS device but many users have reported success by using a powered USB hub and an Apple-branded Camera Connection Kit to provide the necessary amount of power and the right connectivity.

Whether you are a customer or dealer, if you already own an Akai Pro product, or if you just have pre-sales questions, the Akai Pro technical support team is available to help!

Visit the link below to connect with any of the following support options: online community support, phone support, email support.